So January overall did not set an ideal tone for 2018. I was working overtime (which I almost NEVER do) in order to pay off my credit card debt and build my savings back up. I was sick with what was probably the flu. I didn’t want to spend any money (see: trying to save money by working a shit-ton of overtime), so I hardly ever went out.

But I still had, overall, a good month. I started working on a great unit, where I actually got to take care of sick patients and work with an amazing staff. I went to the San Antonio Cocktail Conference for the first time with my best friend Janee, where we got drunk off whiskey and gin. Oh, and Janee came to live with me for a month which was also a lot of fun.

And as for sticking with my resolutions? I accomplished my goal of recording a video every day, and the January montage is below! My other main goal, improve calligraphy, is still going in full force. I attended a brush lettering workshop with Mint and Maple, which gave me a new appreciation for watercolor. And I’ve also been bullet journaling! This is the first time I’ve actually owned and USED a planner since high school, so I’m glad I found a system that works for me. I inadvertently was already “bullet journaling”. I have a 3-subject spiral notebook I would keep notes in, important information about travel plans, nursing job contacts, etc… I didn’t realize what I had been doing was a “thing”, apparently.

For February, I have come up with a few more goals! 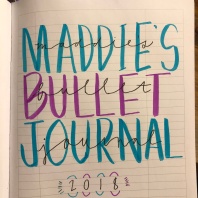 I’m excited for February, and I’m sure it’s gonna be better than January! I leave in about two weeks on my first trip to Asia, and I’m so excited to be spending time on some of the most beautiful beaches in the world.